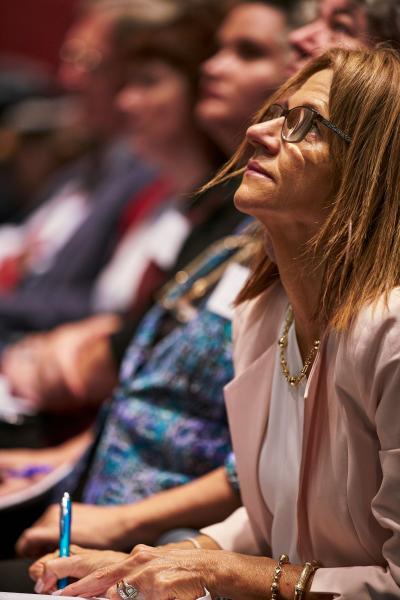 To go or not to go to FuturEd? It was difficult to determine a final decision based on the chaos of the first week of first term at the beginning of a new school year. In the background, a Greek chorus’ dithyrambs chanted the never ending stream of questions about new policies, procedures from the seven graduates who joined Team English at Innisfail State College three days prior. Remaining members of the squad had questions about the new subjects and syllabuses ready for implementation. Realistically, these queries would not all be answered during the first week of term. Therefore, the affirmative decision to attend the Better Strangers Project's conference about teaching Shakespeare was finally resolved. The University of Sydney and more specifically Shakespeare Reloaded coordinators warmly welcomed seminar participants from secondary and tertiary settings across the nation and overseas. Dr Liam Semler opened the conference by assuring teachers would feel ‘welcomed and valued’. This promise was honoured with the help of organisers Claire Hansen, Lauren Weber and everyone present contributing so that all in attendance felt inspired.
Shakespeare Reloaded equipped participants with short and sharp activities that could be used in a variety of classes and across many contexts. There were limitless opportunities to work with and learn from our finest educators. Associate Professor Jacqueline Manuel, Dr Janet Dutton and Dr Don Carter examined and charted Shakespeare in the Secondary English curriculum. Their engaging presentation allowed participants to appreciate the fact that Shakespeare is one of only two writers mandated in the first English syllabus in New South Wales since 1911. Unsurprisingly, the Bard remains unchallenged on prescribed text lists throughout the country. It was repeatedly corroborated that the role of a teacher is to rouse interest and enjoyment in this iconic writer’s work. Additionally pedagogical choices were described as paramount to our curriculum delivery. Audiences were thoroughly engaged when the trio shared some of the questions that appeared on early examinations and correlations were made to our contemporary contexts.
Joanna Erskine, Head of Education at Bell Shakespeare shared countless montages of living Shakespeare and bringing the curriculum to life with some of our most reluctant learners. Her anecdotes were incredibly moving and motivational. The documentary Kings of Baxter particularly resonated with me because I was extremely fortunate to have been tutored by the very talented Huw McKinnon. Huw’s purposeful work with juvenile justice detainees was unequivocally inspirational!  It was humbling to be in the presence of international guest speakers and so many experts across a variety of fields. Additionally, being provided with the opportunity to deliver a workshop on learning sprints or short learning episodes when teaching Shakespeare to primary and secondary school students changed my life. While the prospect was daunting, it was truly gratifying to work with a group of wonderful individuals on a wet Friday afternoon in Sydney. The thought provoking dialogue on empathy, pedagogy and the longevity of the Bard re-energised all in attendance. Better Strangers and Shakespeare Reloaded have equipped us to face and conquer challenges and empower others collaboratively, build an expert teaching team and address the unique needs of our learners. Thank you Shakespeare Reloaded - we are fearless!
Patrice Honnef is currently Head of the English Faculty at Innisfail State College. Despite being an English teacher for many years, she had a short sabbatical in the Humanities as the Head of faculty and transitioned to the Modern History panel before transferring back to English.  She is delighted to return to the world of language, literature and Shakespeare. Patrice is heavily involved in Lions Youth of the Year, Rostrum Voice of Youth, Cassowary Coast Junior Public Speaking Competition and initiating the regional We Will Remember and Aspirations Day forums which occur on a regional level.  She regularly attends Holocaust literature forums and panels at the Sydney Jewish Museum. Patrice presented at the ETAQ state conference in 2017 in Brisbane and has been on external scrutiny panels. She is and external marker for QCS and trials for the new syllabus for implementation in 2019. Patrice adjudicated the IEU literary competition in 2018 and has held HOTSHOT workshops on Shakespeare to primary school students in the region.
Tags:
#ShaxFuturEd #Conference2019 #Pedagogy #UniversityofSydney #Teachersforteaching