Skip to main content
Written by the Better Strangers team in Conference | 30.07.2019
On the 1st of June 2019 the Better Strangers team presented a free one-day Shakespeare Reloaded Imaginarium in Townsville, Queensland, hosted by James Cook University and supported by the English Teachers Association of Queensland (ETAQ). ETAQ arranged for participating teachers to receive professional learning credit and a certificate for the event. Teachers and student teachers from a range of schools, colleges and universities in North Queensland attended a full day of activities run by team members Liam Semler, Jackie Manuel, Claire Hansen, and Lauren Weber.
The Shakespeare Reloaded team was welcomed by Heather Fraser, President of ETAQ’s North Queensland branch. Claire Hansen opened the event with a welcome, emphasising the important relationship between school teachers and educators at the university. Liam Semler then presented a short paper titled ‘Teaching and the Law of Diminishing Gifts’. In his presentation, Liam positioned teaching and learning as operating in a complex space permeated by audit cultures, declining reading and celebration of the self, the present and the market. He noted the teacher’s precarious position in this matrix and affirmed the importance of educators not letting digital providers determine the direction of classroom pedagogy. Liam ended his paper on a hopeful note by underscoring how the act of teaching is not just a form of graceful giving to humanity, but at the same time a profound form of thankfulness. When Liam argued that teachers must be presumptuous in their teaching his point was that it is important for us to protect the presence and humanity of the teacher especially in an age which tends to reduce teaching to a marketable commodity that distorts ideas of grace, giving and thankfulness. 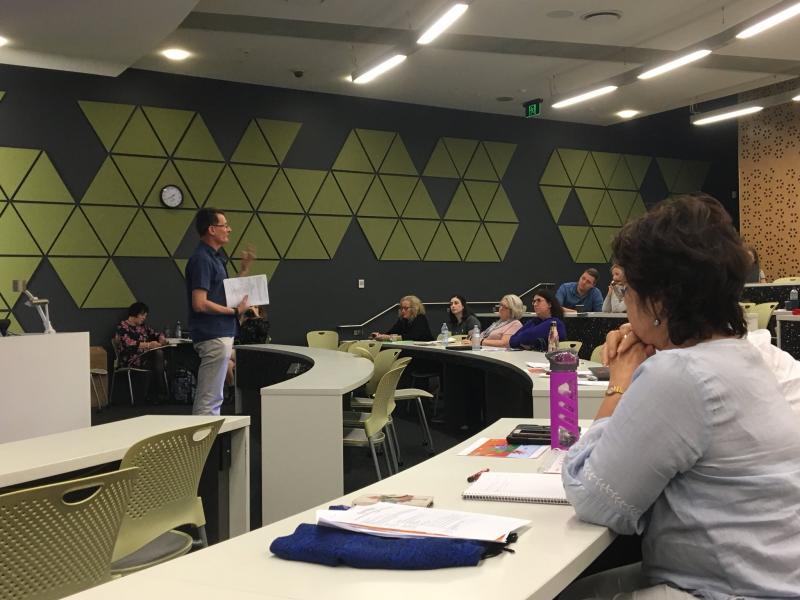 Jackie Manuel then discussed Shakespeare’s relationship to the English curriculum in Australia. She presented some of the historical context and challenges associated with Shakespeare: the teaching of his plays as narratives without the context of early modern theatre practices, his language, and student engagement. Jackie pointed out that understanding Shakespeare’s language can initially seem like an unfamiliar, even secret kind of knowledge, or a ‘secondary discourse’ (Gee 2008). She cited the Shakespeare Reloaded website, the Folger Shakespeare Library and Drama Online as examples of resources available for teachers to use in order to get ready, engage, respond, and go beyond the plays. Jackie ended her presentation with a student’s interpretation of Hamlet as a mathematical formula, exemplifying how students produce new knowledge in creative and meaningful ways when presented with Shakespeare pedagogy that goes beyond what is required. 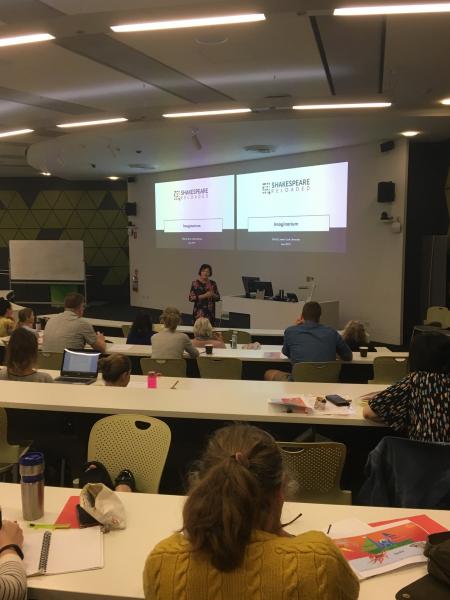 Following morning tea, attendees split into groups for the Hamlet Imaginarium workshop. At the centre of the Hamlet Imaginarium’s theoretical concerns are the function of institutional limits on learning, and the provocation of student potential. This theoretical approach drew on Tyson Edward Lewis’s article ‘The Architecture of Potentiality: Weak Utopianism and Educational Space in the Work of Giorgio Agamben’ (2012). Teachers were invited to discuss Lewis’s articulation of institutional limits, and to reflect on how these limits affect the way they teach, and how students learn about Shakespeare. The following themes were brought to light during discussion time:
• Classroom environment (desks, the aesthetic of school rooms, etc)
• The body (sexuality, violence)
• Expenses of getting theatre groups into schools
• Lack of opportunity for schools in remote areas
• The nature of assessment tasks – including, particularly, much discussion about the ‘insert a scene’ creative writing task
• The avoidance of teaching Romeo and Juliet due to teen suicide concerns
• Talking about mental health, murder, sex
• Is the syllabus political?
Following the Imaginarium and lunch, teachers were invited to engage with another Shakespeare Reloaded activity: Shakeserendipity. For the Townsville event, teachers engaged with The Tempest Shakeserendipity module. In the discussion teachers drew out the following ideas from the various Shakeserendipity resources they engaged with:
• The difficulty in thinking about Shakespeare plays as pieces of theatre due to the numerous film adaptations available
• Finding scenes in The Tempest and matching them with contemporary video clips of things students would find familiar
• The Age of Exploration
• The importance of costuming
• The nature of genre, including science fiction
To close the day, participants played Shakespeed via the Shakespeare Reloaded website. The focus was Macbeth. Shakespeed is a streamlined version of Shakeserendipity. Teachers engaged with four flipcard videos from the activity, and discussed the following ideas in light of what the cards had to offer:
• Escape rooms as an approach to Shakespeare
• The potential of creating a DIY version of Shakespeed for teachers and students to insert their own video content
• The use of a card as a Year 12 writing prompt
• Adding a Shakespeed game about early modern contexts
As these points make clear – participants were excited to offer suggestions for ways the Shakespeare Reloaded project can add to its resources. At the heart of these events is the desire to hear the experience of teachers and to think with them about educational possibilities.
Thanks to all of the participants on the day, and we look forward to seeing you at future Shakespeare Reloaded events. 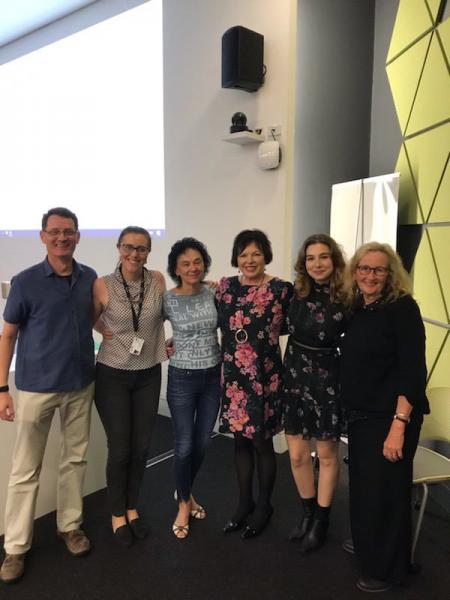