Skip to main content
Written by Claire Hansen in Performances and Productions | 18.05.2015
Shakespeare’s Titus Andronicus is not frequently performed, and has a famously controversial history with questions over its authorship and concerns with its violence. However, Shakespeare’s Globe in London is making its recent and well-received 2014 production available for viewing at selected cinemas in Australia, New Zealand and various other international locations. This is one of several productions featuring in the Globe On Screen initiative (Julius Caesar, Antony and Cleopatra and The Comedy of Errors are to follow). 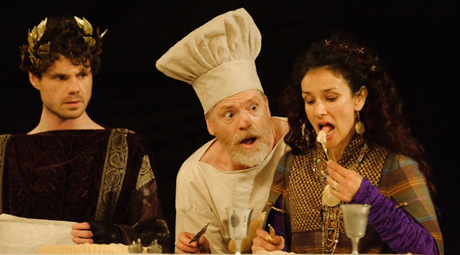 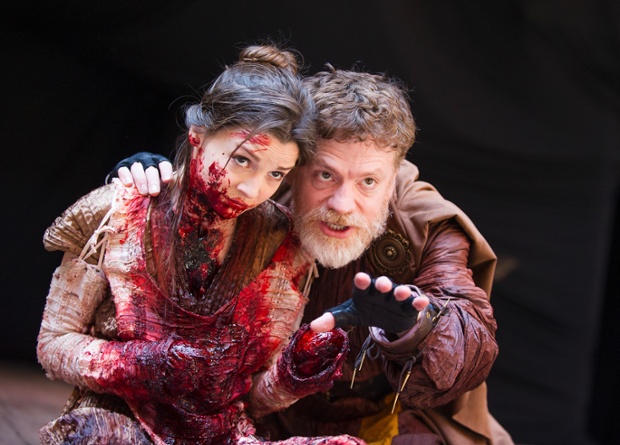 The play never shies away from the violent, but nor did it seem to push beyond what the play requires. It handles the violence with seamless choreography. It is difficult to comment on the impact of the stage violence, as a filmed recording cannot capture the claustrophobic feeling of an enclosed Globe space contained by black cloth, or the smoky incense smell, nor the sight of very well-choreographed violent acts. The production draws all it can from the surreal moment when Lavinia carries her father’s severed hand in her bloody mouth, and from the accidental cannibalism when Tamora tucks into an ominously meaty pie (containing the bodies of her sons). Spencer-Longhurst not only captures the horrendous violence done to Lavinia’s body, but in her continuing post-trauma spasms throughout the performance, silently indicates a sense of the violence of emotional and mental trauma. One of the most shocking moments was another instance of violence done to women: Aaron’s revolting impaling of the Nurse upon his sword. Not technically scripted to be done in this way (we know he compares killing her to spitting a pig), this is violence compounded by shock and unnecessary excess.
Bailey’s production also handles the pit scene rather differently. The play famously includes a bloody pit or ‘subtle hole’, which stands as an onstage visible metaphor for the offstage rape of Lavinia. Into this hole the Goth brothers throw Bassianus’ body; he is later joined by Quintus and Martius (Titus' sons), who are tricked by Aaron. Shakespeare and Peele undoubtedly meant to use the trapdoor for this business, but Bailey doesn’t use the trapdoor at all in this scene, instead creating a pit in the audience space at the front of the stage using unfurled black netting to catch the actors. This seemed largely ineffective to me: first, it makes the entire contents of the pit visible to the spectator which goes against the sense implied in the text and spoils the horror of the unseen (a necessary moment in Titus where less is more). Second, it means that for most of the scene the references to the ‘pit’ do not make sense, because it has not yet been set up.
The Globe’s Titus Andronicus is a spectacular and highly enjoyable production that maintains an effortless sense of energy and pace throughout, maximising gore and humour through a superb cast and effective design. It raises interesting questions about theatricality, violence and comedy, about the power of female voices in this kind of landscape, and about the awkward sense of collusion that the audience may feel in watching (and laughing at) such a production.
Tags:
Titus Andronicus
theatre review
Shakespeare's Globe