Skip to main content
Written by Penny Gay in Performances and Productions | 26.12.2014
Sport for Jove, the excellent young theatre company that takes Shakespeare and other classics around outer Sydney, is currently offering A Midsummer Night's Dream at Bella Vista historic homestead in the Hills District. It's played outdoors, in two locations, the back area of the grand house, comprising veranda and separate kitchen in an L-shape, and then a hundred metres into the local woods, a couple of fine old trees with a platform built between. This offers good fun and a great opportunity for a picnic - I can't imagine going by myself, however much I might like to see a production. But what sort of dramatic experience does it offer?  For me, the occasion solidified a suspicion that has been growing for many of my theatre-going years: text-based drama needs a contained space - even if it's open to the sky - in order to do the work it was designed for.
There are two issues here: visual focus and directional acoustics. They were brought into sharp relief by the contrast between the two locations of this production. The area representing 'Athens' at the back of the historic house had a low platform between the veranda and the arcaded wall of the single-storey kitchen, and a plethora of entrances and exits provided by this architecture. It was a domestic space that fitted the human drama going on in Act 1, offering a readable but not intrusive social background for the actors telling the story. Most importantly, it provided an acoustic shell in the two walls of the L-shaped structure. Clarity, focus, and pace all followed naturally as the societal situations of the court and the 'hard-handed men' were set up. 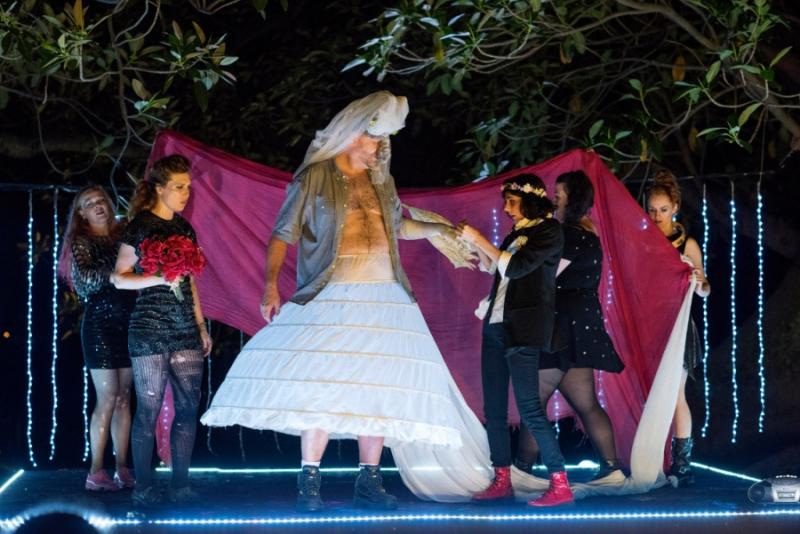 Then we were all instructed to move to the 'woods'. Confusion, dilatoriness, and jostling for places and seats broke the narrative thread. When it resumed, we were watching a much smaller (though higher) platform built between two trees - which did provide amusing hiding places for the fairies - plus an offstage bush and tin dunny, the opportunity for some more jokes. But, alas, no acoustic directionality, no sounding-board: the actors' words were often lost in the great outdoors and the competing noises of fruit bats and distant traffic. Visually, who could fail to be distracted by the fireworks that lit up the horizon at 9pm, or the wonderful stars directly above, when the actors and their utterances were so dwarfed?
The ancient Greeks know the dangers of outdoor theatre, which is why we still have their wonderfully designed auditoriums all around the Mediterranean: spaces in which an actor can stand anywhere in the arena and know that he is the focus of all eyes and his words will carry, however quietly he speaks them (we've all tried out our favourite speeches when visiting Epidaurus - it works!). Similarly, of course, this is the genius of the Elizabethan theatre design, the 'wooden O'. It works, visually and aurally, although it is open to the sky and the surrounding sounds of busy London - even, today, helicopters hovering. Shakespeare knew this, and that's why he was able confidently to write the most complex and beautiful verse for his actors to tell their story in.
Sport for Jove always casts good, energetic actors, and is thoughtful and exploratory about the play's meaning for a contemporary audience. I happen to know the lines of A Midsummer Night’s Dream almost by heart - even so, I was disengaged from the story, and the visual jokes largely fell flat. An audience less familiar with it would be at a loss, probably just waiting for the end so they could finish off the remains of their picnic and head home to more comfortable chairs.  Outdoor Shakespeare is an 'occasion', no doubt - and it sells well - but does it do the play, or the actors', director's and designer's hard work, true justice?
Tags:
Shakespeare
A Midsummer Night's Dream
theatre
Australian theatre
Sport for Jove